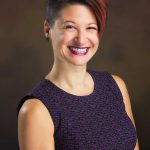 Becca is originally from central Pennsylvania and moved to North Carolina in 2001. She earned her Bachelor’s Degree in Psychology at UNCW and then returned to Pennsylvania for graduate school where she studied School Psychology. She returned to New Hanover County Schools for her internship in 2007. Becca felt called to return to higher education in order to broaden her skill set to better serve the families with whom she worked. She moved to California and earned a Doctorate in Psychology and a Post-Doctoral Master’s Degree in Clinical Psychopharmacology. She returned to North Carolina in 2016 with her husband, her two pugs, Banjo and Houser, and cat, Kevin Bacon. Her favorite part about her career is the variety of ways in which she can help individuals, families, and institutions take steps towards their goals.